Aircel needed to create some unified values to be cascaded and embedded throughout the organisation.

Aircel are a pan-Indian mobile phone provider. They have grown to be the sixth largest telecoms service provider in the last 12 years. They have 65 million customers serviced through twenty three regional circles and they employ about 5,000 staff. Due to their rapid growth, the company needed to create some unified Aircel Values to be cascaded and embedded throughout the organisation. What would be the best way to embed these Values among over five thousand staff in over twenty three circles? 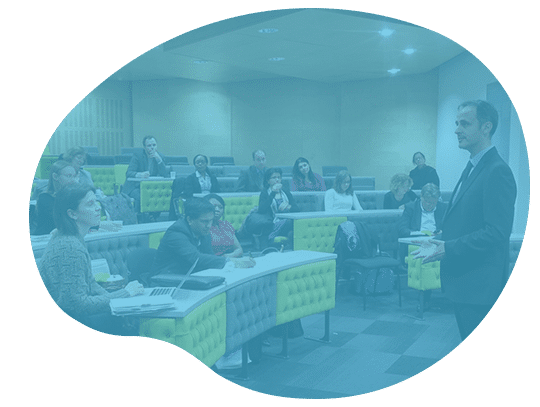 Gautam Bhushan, Academy Head at Aircel, saw a presentation by Steps in Mumbai and realised that our unique approach to interactive drama would be an excellent method of communicating and embedding the Aircel Values. Mohan Madgulkar, our Country Head for India, met Gautam and together it was agreed that we would deliver a half-day session for about 40 delegates at a time, so that two sessions could be delivered in a single day. The three Values; Simple, Creative and Trustworthy would be presented and discussed through interactive drama scenarios using professional actors carefully selected from our pool of Associates in India.

The session consisted of four different scenarios. The first one, which acted as an icebreaker to familiarize the delegates with the way interactive theatre works, depicted two employees discussing a CSR initiative. One character was very positive about the project while the other was very cynical. The optimistic character asked the delegates “How can I help my colleague feel more positive about this project?”, generating a broad discussion about values, and the contribution of company values to decision-making and individual behaviours.

Three more scenarios followed, each focusing on one of the three Aircel Values: Simple, Creative and Trustworthy. For the Trustworthy scenario a couple were seen having a lavish dinner in an expensive restaurant, which the husband then paid for using his company credit card, ready to claim it was a client dinner. Delegates then discussed, in small groups, what the headline in the newspaper the next day would be, if this story were leaked to the press. Through interactive theatre, presenting ‘as real’ situations – delegates were able to see the Aircel values brought to life and explore how these values can be applied practically within their work.

After the very well received pilots in Pune and Mumbai in late 2011 the pan-India roll out began in February 2012. To provide country-wide coverage Steps auditioned, selected and trained teams of actors in Mumbai, Delhi, Bengalaru and Kolkata. From this activity we created a skilled, multi-lingual and highly experienced team of Indian associates who were very well placed to meet client requirements.

Steps have, to date, successfully delivered this initiative to 4500 employees, covering a total of 33 Aircel offices. Feedback has been resoundingly positive, with 97% rating the training good or excellent and a 16% increase in delegate confidence in tackling these issues after the training. 100% of attendees said they would recommend the training to a colleague.

Cascading learning through Steps’ non-conventional, innovative drama-based methodology, helped us drive our objectives very effectively and with a lot of impact”.

- Namrata Wakhloo, Head of Learning and Development at Aircel, was delighted with the outcome of this project.

Download a PDF of this case study
all case studies